The functions of desander cyclone

All desander cyclones for grading, concentration, and desliming are performing the separation by particle size difference. The feed pressure is generally in the range of 0.06 to 0.2 MPa, and the flow rate at feed port is 5 to 12 m/s. How can the coarse and fine particles in slurry can be separated in such a short time? The reason is different inertial centrifugal force. 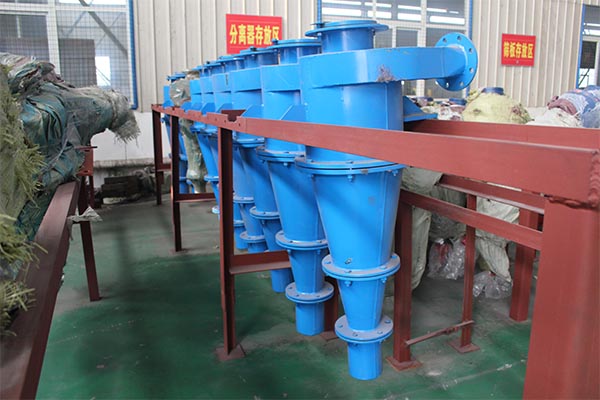 The solid particles enter cyclone in a tangential direction along with the slurry in a suspended state, then slurry liquid is forced to rotate after encountering the wall, solid particles continue to move forward according to the inertia of original linear motion. The coarse particles have a large inertial force and can overcome the hydraulic resistance to approach the wall. Under the push of subsequent feedstock, slurry continues to move downwards and slewing, and solid particles correspondingly generate inertial centrifugal force. The coarse particles then continue to concentrate to the periphery while fine particles remain in the central region. This results in a layered arrangement of coarse and fine particles from the wall to center.

Of course, the inertial centrifugal force exists not only in solid particles but also in slurry liquid. And it is transferred from inside to outside, reaching the maximum at the wall. This is why desander cyclone must have a certain feed pressure. This centrifugal movement of slurry also prevents it from being discharged directly from the overflow pipe after entering cyclone, but only downwards. As slurry flows from cylindrical portion of cyclone to the cone portion, the flow cross section becomes smaller and smaller. Under the contraction of outer slurry, the inner slurry has to change direction and turn upwards. Thus two sets of swirling flows are formed in cyclone; the downward swirling flow of outer layer and upward swirling flow of the inner layer. Fine particles are carried into the overflow and coarser particles enter the grit. 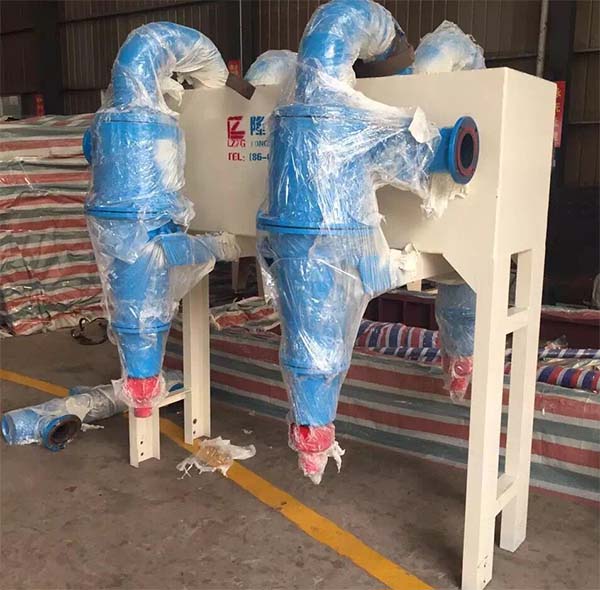 As a result of the centrifugal expansion of slurry, no liquid can exist on central axis, and a low-pressure air column appears. The average diameter is about 0.5 to 0.6 times the inner diameter of the overflow pipe. Since the internal pressure is lower than atmospheric pressure,  air is continuously drawn from the underflow port.