At present, the main purification methods of kaolin include gravity separation, magnetic separation, flotation, chemical leaching, bleaching and roasting, etc. The specific process needs to be based on the type of impurities to be removed in the original ore, the occurrence state, the particle size of the cloth and the required product quality Depending on the indicator.

1. gravity separation and purification of kaolin

Principle of reselection: use the difference in density and particle size between kaolin and gangue.

Purpose of heavy selection: to remove light organic matter, and high-density impurities such as quartz, feldspar and elements containing iron, titanium, and manganese.

Practice has shown that re-selection and purification of kaolin is effective. Using small cone angle cyclones or centrifuges to replace the washing and screening operations in the kaolin purification process can not only achieve the purpose of washing and classification, but also remove some impurities , Has good application value.

Principle of magnetic separation: use the magnetic difference between kaolin and gangue minerals such as hematite, siderite, pyrite and rutile.

The magnetic separation and purification process solves the problem of the development and utilization of low-quality kaolin resources that are not of commercial mining value due to high iron content. The superconducting magnetic separator can directly process kaolin with more impurities. However, it is difficult to obtain high-quality kaolin products from a single magnetic separation operation. At present, other processes such as chemical bleaching are needed to further reduce the iron content of kaolin products.

Principle of flotation: use the difference in surface properties between kaolin and gangue minerals.

Purpose of flotation: To process kaolin ore with more impurities and lower whiteness, and remove its iron, titanium and carbon impurities, so as to realize the comprehensive utilization of low-grade kaolin resources.

Flotation can significantly increase the whiteness of kaolin, but its disadvantage lies in the need to add chemicals, which increases production costs and easily pollutes the environment. 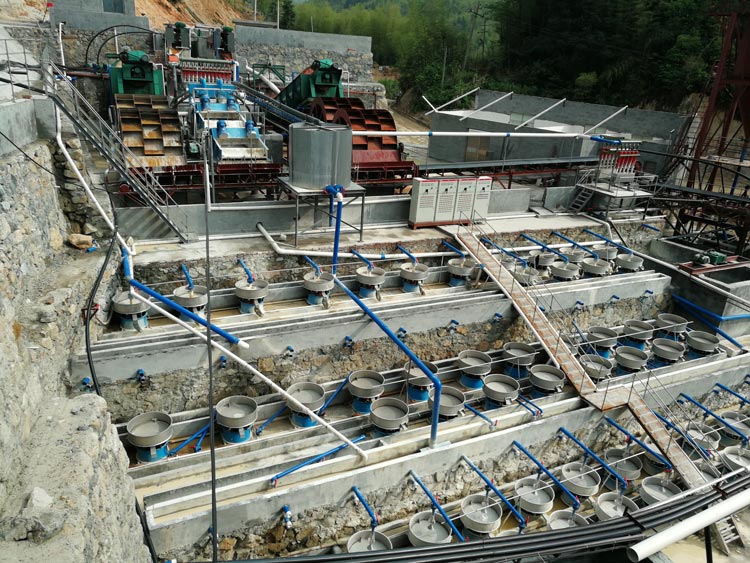 This project adopts self-developed new technologies, new processes and new equipment, and eliminates outdated technologies, processes, equipment and production capacity. The new type of pulping machine developed in this project is used for the dispersion of minerals in the process of raw material pulping, which is shorter than the original pulping time, and the separation of minerals and impurities is…

The main equipment for desilting kaolin include spiral classifier, wheel sand washing machine, hydrocyclone, vibrating screen, etc. The main technological process of washing kaolin The sand is first removed by a spiral classifier. It is then entered into a hydrocyclone for classification. The sorted coarse concentrate enters a horizontal spiral centrifugal classifier to separate the paint grade and filler grade…

Kaolin washing and dewatering machine for sale in Indonesia